To share your memory on the wall of Bernice Cottman, sign in using one of the following options:

The gesture that can change the world

Print
Bernice Blondell Holly Cottman, was the youngest of 12 children from the union of Isaac M. Holly, Sr. and Nellie Ariminty Holly (nee Demby). Bernice departed this life in the early hours of Saturday, November 16, 2019.

Bernice was bor... Read More
Bernice Blondell Holly Cottman, was the youngest of 12 children from the union of Isaac M. Holly, Sr. and Nellie Ariminty Holly (nee Demby). Bernice departed this life in the early hours of Saturday, November 16, 2019.

She enjoyed volunteer work including community projects and tutoring. She was a long time member, and one of the founding members of the Freya Club, a social club and charitable organization.

Bernice taught art for 15 years at Central Consolidated School. After that she taught Special Education at Hickory Elementary School for 24 years. The building where Central Consolidated School was housed became Hickory Elementary School—39 years, same location! She was a dedicated teacher who enjoyed working with children, especially those with special needs. After retiring from teaching Bernice worked as a tutor for several years at the Huntington Learning Center in Perry Hall, Maryland.

Bernice served as a board member of the organization that previously owned McComas Institute. She contributed historical documents and information to the current restorators, the Hosana School board. Her hobbies included planting flowers, shopping, traveling, and cooking in addition to crafts, specifically sewing, making hats, and working with silk flowers. She assisted in wedding planning for various family members and was a financial advisor, attorney, and teacher to many of her friends and family. She collected many decorative bells during her travels, and had an abundant collection of seashells. Bernice’s joy of life however was her large and extended family, and most importantly her Granddaughters who affectionately called her Gran or Grammy.

She is survived by her loving sister Joann Holly; her daughter Yolanda Pamela Oliver Jefferson; granddaughters: (Bernice) Tiffanni Reidy (Michael), (Lloyce) Jessica, (Aimee) Jordan; her god-daughters: Andrea Eley and Erin Engen, and her pride and joy—a great-granddaughter Autumn Frederick Reidy, born on Bernice’s 87th birthday. She also leaves to mourn many, many nieces, nephews, great-nieces and great-nephews, and a host of other relatives and family friends.
Read Less

We encourage you to share your most beloved memories of Bernice here, so that the family and other loved ones can always see it. You can upload cherished photographs, or share your favorite stories, and can even comment on those shared by others.

Plant a Tree in Memory of Bernice
Plant a tree 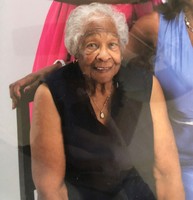