To share your memory on the wall of Howard Mclain, sign in using one of the following options:

Provide comfort for the family of Howard Mclain with a meaningful gesture of sympathy.

Howard enjoyed spending time with family and friends. He enjoyed boating. He would spend hours on the water fishing and crabbing. He enjoyed working on cars and was known for steaming crabs.

Howard lives on in the memories of his Children: Marcus, Jeremy, Traves (Curtis), Ellena, and Danielle (deceased); five grandchildren Jada, Skyler, Amirah, Jaylen and Morgan; one sister Judith (Preston) and one brother Wayne (LaTonya), and a host of aunts, uncles, nieces, nephews, cousins and a multitude of friends.
Read Less

The insignias listed here may be subject to copyright and / or trademarked. Those copyrights and trademarks are owned by the respective organizations.

We encourage you to share your most beloved memories of Howard here, so that the family and other loved ones can always see it. You can upload cherished photographs, or share your favorite stories, and can even comment on those shared by others.

Posted Jan 19, 2019 at 09:25am
To the family and friends of Mr. McClain always cherish the fond memories of time spent together and although you may grieve the Bible can be a source of comfort. At (Revelation 21:3,4) it speaks of a time when there will be no more sickness or death, also at (Acts 24:15) it speaks of a resurrection that we all can look forward to. May the peace and love of the God of the Bible be with you all.
Comment Share
Share via:
S

Posted Jan 04, 2019 at 06:59am
I’m sorry to hear about your loss and pain and wanted to share the Bible’s hope of a resurrection at John 5:28,29 at a time when there is no more sickness pain or death right here on earth according to Revelation 21:3,4. May the god of comfort give you comfort by means of the scriptures in this time of bereavement.
Comment Share
Share via: 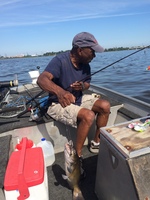