To share your memory on the wall of Jason Smothers, sign in using one of the following options:

Print
Jason Tyrell Smothers, Sr. was born May 24, 1979 at Harford Memorial Hospital in Havre de Grace to John Wesley and Gloria Smothers. He was the fourth of the Smothers family’s six children, and for many years, was the youngest of them.

... Read More
Jason Tyrell Smothers, Sr. was born May 24, 1979 at Harford Memorial Hospital in Havre de Grace to John Wesley and Gloria Smothers. He was the fourth of the Smothers family’s six children, and for many years, was the youngest of them.

Jason graduated from C. Milton Wright High School in Harford County, and joined the United States Marines where he served in his early professional years. Jason spent much of his career as a financial planning advisor, helping others make decisions on life insurance and pension plans. He studied political science and history at Bowie State University, Strayer University, and finally, Coppin State University where he was a few credits away from graduating at the time of his passing.

A man full of personality, Jason had a generous heart and a great sense of humor whether he was laughing with you or at you. He had a gift for making new friends everywhere he went and always had a colorful story to share. Jason loved giving to others even when it meant he would have to go without. He often just wanted the people around him to be happy. If someone seemed to have a bad day, Jason would take time to sit and talk with them.

A talented and passionate writer, Jason wrote numerous poems through the years and several novels he always intended to publish. He also had a stint ghostwriting for a member of Congress. Even when his laptop was not with him, Jason would pour out his writing on his cellphone.

Jason took his role as a father seriously and poured out love and support to his three children as often as possible. Beyond his own beloved children, Jason enjoyed pouring into others whether it was helping his nephew King with homework, sharing his perspective on black culture or coaching football for the Aberdeen Bulldogs and Bel Air Terps when his son “Tyrell” played for those teams.

He was a member of Clarks United Methodist Church, where he served as a choir member in his youth. Earlier this year, Jason also rededicated his life to Jesus Christ.

Jason thought deeply about many things and had several favorite mantra he would share often, including “Love is not a verb, it’s an action, “ and “There are lions and sheep in this world. You have to decide who you are going to be.” Many who knew and loved Jason will especially miss his jokes and the deep conversations with him.

Jason is preceded in death by his brother Matthew, paternal grandparents Rev. John W. and Martha Smothers, Sr. and his maternal grandfather Charles Higgins. The best of Jason’s legacy lives on through his beloved children Amirah, Jason Tyrell Jr., and Autumn Smothers. He also leaves behind his fiance Alexandria Harriott; his loving parents John Wesley and Gloria Smothers; his siblings Lisa Clark (Danney), Renee Minter (Ulysses), Dana Smothers (Taylor), and Lakia Smothers; his maternal grandmother Elsie Higgins; his godparents Carol Keyes, Emory and Eunice Thompson; his brothers and sister at heart, Zeus and Valerie Collins, and Jason Jones, and a host of nieces, nephews, aunts, uncles and cousins who loved him.
Read Less

To send flowers to the family or plant a tree in memory of Jason T. Smothers, please visit our Heartfelt Sympathies Store.

Receive notifications about information and event scheduling for Jason

We encourage you to share your most beloved memories of Jason here, so that the family and other loved ones can always see it. You can upload cherished photographs, or share your favorite stories, and can even comment on those shared by others. 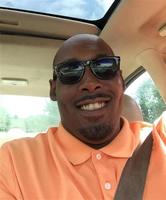